What If Success Was Easier? 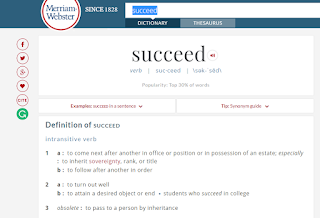 2a : degree or measure of succeeding

b : favorable or desired outcome; also : the attainment of wealth, favor, or eminence

b : to attain a desired object or end

From the latin succedere: to come after, or up from below

Why do we not do a better job--or any job at all--defining success for ourselves?

Why is the first definition of success one that Webster's qualifies as obsolete? An outcome or result. The first definition of succeed is literally "to come after another in rank or position, to follow after another in order". The second definition is to attain a desired end. Why don't we do more to delineate in any kind of terms what our desired end is? Why do we always default to "money" or "fame" or "status of some kind"?

I admit that I am a perfectionist with [insanely] high goals for every artistic event I'm involved with. My props had to be indistinguishable from the real thing, if I couldn't get the real thing. My shows had to be sell-outs, or as close as physically possible without literally picking people up and bringing them to the theater. Classes and workshops needed to have the max number of students or I felt unsatisfied as either a teacher or a venue provider. More, always more.

What if we defined success differently, though? I've written about failure before, how I don't truly believe in failure as long as you're trying and learning. But why can't the same be true of success? Why isn't there a spectrum rather than two distinct points? You did or you didn't. You succeeded or you failed. You made a gazillion dollars or you're a poor hack who just needs to quit trying. You're an investment banker/hotshot lawyer/neurosurgeon or you might as well be laying on your couch without a job. Dr. Strange thought his life was over because he couldn't use his hands any more after the car accident.

Why do we set ourselves up for the massive amount of disappointment that this definition of success inherently creates?

Yes, money and fame are nice (I'm guessing.) But we can redefine the outcome we want and have success on our terms.

I want a family and a house and live in a community I can afford without feeling like all work and no play.

I want to produce theater that makes me--and hopefully an audience--laugh and cry and try to be a better person.

I want to help other performing artists produce work that moves them and their communities, regardless of what size that community is or what that community looks like. It could be a town of 8,000 people, largely agricultural based, with a strong Irish background and cultural history of story-telling. It could be a neighborhood of 400 with young families of all nationalities trying to find some commonality between them and make their neighborhood a better, safer place to live. It could be a dancer who has moved six hours away from the only home she's ever known and just wants to move her body and find like-minded individuals.

Connection is succeeding. That may be one person. Or 1000.

More is better, sure. But it's not necessary. Define your success and then achieve it.

Or not. And redefine and try again.
Posted by Devra Thomas at 11:11 AM No comments: