It's Thanksgiving, and I'm in the middle of thesis paper research, so naturally I'm thinking a lot about who has been helpful and needs thanking.

Almost everyone I've contacted about varying topics has been both intrigued by my thesis and generous with their time and energy. I'm especially thankful to:


An admittedly short list, because really this journey started six and a half years ago, and there are more people to thank than room. I am taking the attitude of "paying it forward" since there's no way I could ever appropriately repay these folks for their generosity. My only hope is that I will be able to someday be as generous as they are today.
Posted by Devra Thomas at 9:59 AM No comments:

Mr. Diplomat and me: Improv Rules!

Is laughing with people about yourself the same as being laughed at? On Nov 22, I was the special guest for Mr. Diplomat, an improv show held every Friday night at DSI Comedy Theater. The show's set-up is a special guest comes on, tells stories from his or her life, and then the crack improv team makes up scenes based on those stories.


I was asked to be the guest in a rather informal way: the guy who took my old job is also on the Diplomat team and they'd had a guest back out, so he asked if I was interested. While I may not have any desire to be an actress, that doesn't mean I don't enjoy my time on stage, so I said, "Yeah, sure, I'm down with that." Kit promised I didn't have to be funny, I just had to get up on stage and tell some stories. They would take care of the rest.

Having recently listened to Daniel Pink's To Sell Is Human, two of the primary rules of improv were already on my mind: "Accept all offers" and "Make your partner look good." The first one is commonly abbreviated "Yes, and"; it means you cannot negate what someone else has said. You must accept the detail or suggestion they've offered and build on that for the scene. It's harder than it sounds. The second one is, too. Being a good improvisation artist is very different than being a stand-up comic, who only has one person on stage to worry about, but it is also very different than being in a legit play, because there you typically have a script that you've (hopefully) read in advance. In improv, you have no idea what the other person is going to say. You must trust your partner, that they are performing under the same rule as you: you're going to make them look good.

These two axioms are applicable in the straight theater world as well (I hate that term, but lack anything better at the moment) and I think they are woefully underused. One hopes that a director will trust her actors enough to let them make some character choices on their own. One hopes that designers say "yes and" when a director proposes a specific element.

One also hopes that an organization will say "Yes and" when an audience member makes a suggestion for the lobby or a play they'd like to see.
Or tries to make donors look good when planning fundraising appeals.
Or accepts offers from potential collaborators or business partners.

It's very seductive to fall into established patterns for how an organization should interact with customers. I will readily admit that when I was training Kit, even though I repeatedly said "Find your own way to do this, as mine may not work for you", I still had to bite my tongue when he made changes to things I'd done for years. I found myself saying "Yes and" under my breath almost every day. I trusted that he was making these changes to make the organization look good (and they did, everyone raved, which then made me pout a little, but that's neither here nor there).

Small nonprofit theater doesn't have the luxury of bundles of money to throw away on failed attempts. So what we need is a lot of trust, that by truthfully telling our stories, accepting all offers, and making sure our partners look good, we will make art that is meaningful and build audiences that appreciate that.
Posted by Devra Thomas at 9:24 PM No comments:

"Success does not have to be solemn"

I'm starting a new theme, of posts about where I see cross-industry applicability. While I'm passionate about the performing arts, I take inspiration from everywhere.

In high school I wanted to go into magazine publishing because I adored the medium. I've always been a sucker for a good article, especially one with beautiful photography to go along with it. So I was pleasantly surprised by this New York Times video about British handbag designer Anya Hindmarch. Done as interview with writer Suzy Menkes, this short video captured my attention, and also held some nuggets that I think apply to theaters as well.

Menkes describes Hindmarch's bags as "women-friendly, with an attention to detail and lots of fun." Shouldn't that be theater? We all know the statistic that 67% of Broadway theater audiences are female, and I'm sure that holds true across nonprofit and non-New York markets, as well. Are we finding ways to make our theaters friendly to who is really in our audience? Are we paying attention to all the details of a patron's experience, or just lip service to what happens outside of the stage area? How do we make the experience fun? Two of the National Arts Marketing Project Conference sessions last week were on ways to make the rest of the patron's visit a fun and engaging experience (Augmented Reality and Activating Spaces, for those who want to check the tweets). I can't wait to see what those attendees come up with and share with their audiences!

"You're the only bag designer to put on a fashion show," Menkes says to Hindmarch. She remarks that she's trying to give "context" to the handbags themselves. A handbag is meant to be used, of course, and designer bags are made to be SEEN, not just seen. I want to propose taking a slightly different read on this, though, for theater: what's the unexpected for us? If our product is a staged production, what is a way we can re-contextualize that in order to either reach a different audience or to delight the one we currently have? Or take Hindmarch's "I'm not a plastic bag" tote. It has that balance of being quirky, without being unapproachable, of being funny, but still within the context of her product world. Doing something different in theater shouldn't be so out of the world that audiences can't grasp what you're doing. It should be just different enough to capture their attention.

"I've built [my stores] by hiring amazing craftsmen who make things you want to wear." Hindmarch responds to a query about how she's grown the business over the past 25 years. Replace "wear" with "experience" and shouldn't we have theater's mantra? Let's hire amazing craftsmen--the most talented artists we can afford--and let them make things we want to experience. Guthrie, Papp, Fichandler, all had the long-term vision to know this was the way you produce great art. Be passionate about your customer. Make things they want to wear.
Posted by Devra Thomas at 1:14 PM No comments:

One ending is simply another beginning

Yesterday, the Deep Dish Executive Board took me and my husband out for a farewell dinner. The food was delicious, the company lively, and many complimentary things were shared around the table.

The old saying, "I don't regret the things I did, only the things I have not done" applies here. I will look back with fond memories of my time there, but I will always wish I had done more. Worked harder at donor stewardship. Pushed for the marketing campaigns. Written the 'why not' grants. Running a small independent nonprofit theater is not easy; leaving the comfort of corporate retail with its automatic product shipping and management teams and decent paycheck to take on the part-time administration role was a leap of faith.

And now, I stand at the precipice again. I feel like Indiana Jones at the third test in "Last Crusade", where he says "Only in the leap from the lion's head will he prove his worth" before closing his eyes and taking the step into the void. There's only faith that I've got enough moxie to do this. I'm a huge believer in underpromising and overdelivering as a key to great customer service. Which makes me worried from two different directions: Can I deliver on what my [innate] promise is?

AND: what if I am underpromising? What will be the overdelivering?
Posted by Devra Thomas at 9:11 AM No comments:

Bullet points about my thesis

I felt it important to have a few things up here about my thesis paper, as I'm talking to a lot of different folks about this, and, hey, some of them may even do some due diligence and look me up before we chat.

Highlights, in no particular order:

Posted by Devra Thomas at 11:40 AM No comments:

Just a little something...

...about my next gig. Many thanks to Rachel for entrusting me with her baby, Byron Woods for the care and conscientiousness he put into the article, and to Justin Cook for a great photo shoot.

http://www.indyweek.com/indyweek/a-changing-of-the-guard-at-durham-theater/Content?oid=3762578
Posted by Devra Thomas at 4:52 PM No comments:

Slowly growing my arts admin library. Note: not all my books are on this shelf yet, as I've accumulated a few more as textbooks or thesis research, which are being stored elsewhere.

What's your favorite book on arts admin, building community with art, or customer service and building relationships, or fundraising? 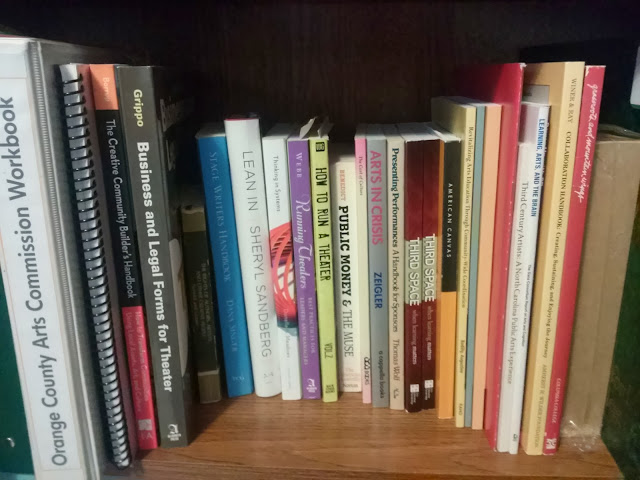 Posted by Devra Thomas at 8:40 AM No comments: