My problem has always been wanting to immediately jump to the end result without mucking about with the messy hard tasks needed to get there.

Apparently this is quite normal. I'm finally getting around to listening to Daniel Kahneman's 2011 bestseller Thinking Fast and Slow. I'm not very far into yet (only listening in the car and driving has been on hold with the snow recently), but early on Kahneman points out that our brains are wired for the path of least resistance. Thinking requires effort and those tasks which require more thinking are less desirable because of the effort required.

That hit me rather hard. I had typed that first sentence two or three days before listening to the piece in the book, as a place holder on a blog idea. When I listened to Kahneman's research and theories, I realized that what I had been doing all along was human nature and not a specific Devra defect. (I have lots of those, but another time.)

I decided to write about this now because I'm having that itchy feeling of "this is hard and I don't want to do it any more" constantly these days. Having just stepped out of a position I'd held for 6.5 years into a job that I'm having to pick up new procedures and make long-range strategies myself is definitely requiring slow thinking. Researching and writing my thesis (new content) and creating a monetized platform for an individual artist's techniques (entrepreneurial endeavor) is pushing my brain to the max. Talk about new pathways: it's like trying to run a marathon through molasses.

I know all  some of the tricks for moving forward on projects: breaking the project down into smaller steps, having accountability partners, setting non-negotiable deadlines, etc. Occasionally I get those moments of flow that make the task seem almost manageable. Mostly right now, though, I'm having to will myself every day to take one more step up the mountain of creation so that I don't lose precious time.

Here's the arts admin tie-in: changing the way our arts institutions are being run requires slow thinking. It requires purposeful, effort-full, hard, lengthy slow thinking. Added to the inherent abhorrence of change, this is a losing proposition for all but a handful of administrators or organizations. Why do we laud Michael Kaiser's work? Because he makes these two things look easy. Why is Nina Simon such a rockstar in the museum world? Because she does these two things every day. The way forward for the arts is not black and white. It's not a fast-thinking fix. Making our field relevant and sustainable (chicken-and-egg) requires the slow thinking of our researchers and academics and the change tolerance of our leaders and creators to build something new.

In the theater world (which is the world I inhabit, so there are points about visual art or other performing arts that I can't speak to), the act of theater is as old as humanity, but our current system of theater is only 60 years old or so. Same age as television, when you think of it, and look at all the changes that medium is undergoing now. Commercial theater didn't die when nonprofit theater started. The consumption of theater in exchange for a monetary medium had been happening for thousands of years by that point. The hue-and-cry that is now being sounded for the nonprofit theater model was the same one sounded for commercial theater when that model started. Examined from afar, in fact, the two models are not that indistinct: the same basic stocks (plays, playwrights, actors, directors, techs, venues), the same feedback loops (money in some form or fashion), and similar rules to the game (largely thanks to Equity and the NEA). I'm going to go way out on the limb and say their purpose is actually the same: to use the theatrical art to extract a change of demeanor in another person.

The theater system, as a subsystem of the arts, is not broken. It can't be, otherwise there would be no theater. The arts are not broken, otherwise there would be no dance, no song, no comedy, no sculpture... Relevance is a, well, relevant term: there are millions of people for whom making and consuming art in some form is a daily necessity, a Maslow bottom-level (and I know folks who would argue that that is actually true of everyone, some just don't want to admit it or call it art). So what needs to be relevant to whom? And sustainable by who's definition? Arena Stage looks an awful lot from the outside like any performing arts center in any major city. Zelda would argue with me, as would Molly, but for the casual live-entertainment ticket-purchaser, there isn't a difference. So is a large building, multi-million dollar endowment, 10% return on capital investment, recoupment in a short time span, critics loving every line and direction, audiences signing up for season subscriptions, people beating a path to your door, 24-7 lines sustainable?

"To get to tomorrow, Theodore, you have to dial one number higher." We're not looking high enough, broad enough, long-term enough. Most of us can't: we're too mired in the daily activities of doing the business of art to really see the system for what it is. Our national organizations try to do what they can, which is commendable. Fear of change, lack of time and energy, though, still keep the varying subsystems plodding along as they have been. Changing goals, or paradigms, or the very system itself, will require someone who is comfortable trudging through the messiness.

The molasses is thick. But the finish line is sweet.
Posted by Devra Thomas at 7:42 PM No comments:

On Being a Theater Parent 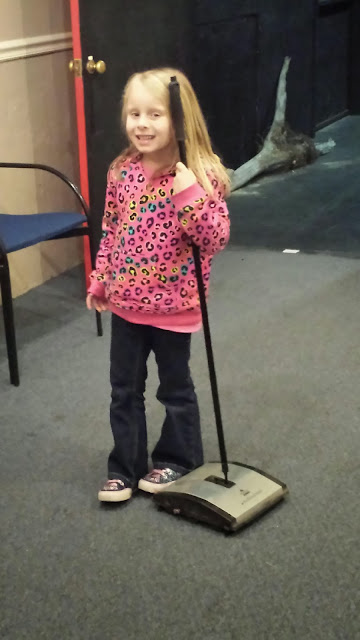 Parenting is tough. I'll put that out right up front.

I'm not writing this to get into a spitting contest. It's not a pity party either: a career in arts administration was my choice, much like my husband chose a career in retail management. We both knew what those choices meant as far as schedules and child-rearing before we had children.

I'm writing this to shine a light on what it is like to be an active parent working in theater management. Mass Media gives us a disjointed view, if any at all, of a career which resembles a luxurious soap opera. Much of what is written about our field in either scholarly or journalistic blog posts is written about the million-dollar companies with staffs and commensurate budgets so a mom could actually afford a babysitter rather than bring her child to the theater to clean before and run the box office of a show.

And all too many of us know parents who simply dropped out of the scene when they had kids of a certain age, entirely avoiding the struggle to both honor their artistic need and be an emotional support to their family.

Every year, the theater field loses amazingly talented people--men and women--who cannot continue working for a pittance with no health insurance or childcare benefits. My hypothesis is this is the very reason why there are no longer more women at the helm of regional theaters: the feminist movement opened more lucrative doors for them in other fields. What was once a power position to run a theater in the 1950s and 60s became a low-wage job in the 1970s and 80s. And we have not recovered from this.

My hope is that by sharing my story about being a theater parent--not the stage-mom of current lore, but an adult, a mother, who is making a career in theater--talking with other theater parents about their experiences, and shedding light on the situation for the rest of us in America who are called to theater even as we have another job (or partner) to pay the bills, we can stop being ashamed of our artistic needs and instead find ways to support each other and our communities in sharing them.
Posted by Devra Thomas at 9:03 PM No comments:

As I've done for a couple years now, I take an hour or so and do a review of the prior year's work and think about what I'd like next year to be like. Many thanks to Rosetta Thurman for this practice and the  thought - provoking questions.

2013 was a tough year, but looking back I still made a lot of progress and started putting things in place. I did a great job developing the brand of Devra, so much that it netted me a new job. Although, one of my goals for next year is for said job to pay me a living wage (insert ongoing discussion about artists/startups/small Org mgrs here).

I loved being asked and serving on grant panels. There is a tremendous amount of art and artists in my community. It's difficult to parse who gets funding when sitting around the table. One of my goals for 2014 is to be more visible in the community as a funder. Most of these artists or smaller organizations are flying by the seat of their pants, and a caring face may go a long way. At least,  that's what I hope.

One of the things I feel I didn't do as much of as I wanted was developing relationships with my female friends and colleagues. Partly because we're all so busy, sure, but we can try harder. I really want to see Ladies of Triangle Theater have an active presence. Figuring out how to do that will be a constant slow simmer project.

The thing I'd like to learn more about in 2014 is living "yes and". I've already blogged about my improv experience, and I want to build on that brief introduction. 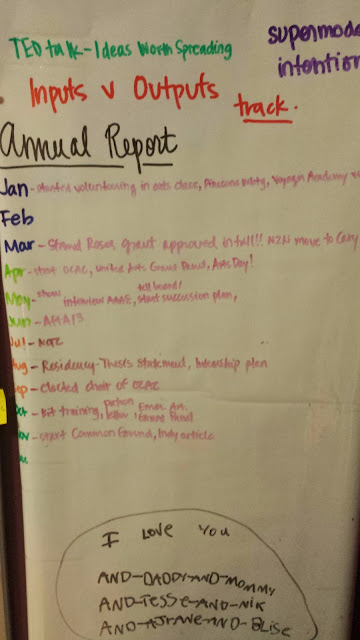 Posted by Devra Thomas at 10:13 PM No comments:

I both love and loathe this time of year. As a hardcore ESTJ, I do adore all the planning and possibility inherent in the this beginning (also, like many, in the late summer/early fall of the academic calendar). However, as someone who has NO patience, all the planning bums me out because I want those projects to be completed immediately!

This past fall was difficult for me: with all the transitioning going on I lost a lot of my daily and weekly routines and constantly felt behind on everything. I was stressed a lot more than usual, snapped at my family, and basically quit exercising. So the big thing I'm working on right now is getting my 50,000'-20,000'-descent views (otherwise known as monthly-weekly-daily) in good working order and INTO THE DAYPLANNER.

One of the "Getting Things Done" info posts I ran across said: "If it's on your mind, it's not in the right place." I chuckled because it's true. You can't do the higher order, longer term, strategic thinking necessary to get ahead in [insert your particular dream or field here] if your brain is constantly cycling through how dirty the house is or did you do enough research for the paper or have you followed up with your donors lately. This is where the written-in-some-form, time-bound routines come in. Even for those of you who may not like routines, who like to flow with the wind in your daily life, making some sort of plan for your time will help you achieve your goals.

I am not one to say "my way is the best and you should do it, too." Friends have looked at my dayplanner before and literally shuddered at the overload. But it works for me. Find what works for you.

How do you organize your day? What are your big and little goals for 2014?
Posted by Devra Thomas at 11:45 AM No comments: