14 Ways Indy Theaters Can Use Social Media Like Award Shows 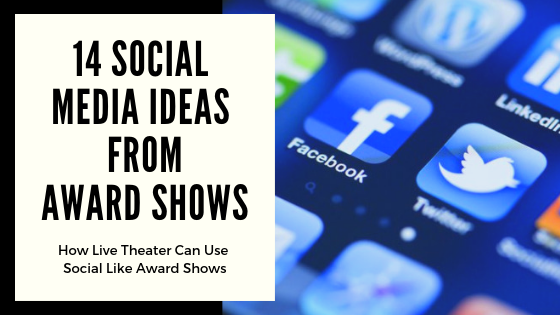 Any time I read, well, practically anything, I always wonder how the lesson can be applied to live independent theater. A recent article from Nielsen Ratings proved no different. "Award Shows are Big Winners on Social Media"  got me thinking "How can live theater use social the way the awards shows do?"

After all, the two events are very similar. For starters, they're both live events. Attendees are all in the same room together. There's often alcohol involved. There are distinct phases to the event: the pre-show, the live event itself, and post-show discussion.

Secondly, like awards shows, theater productions should be culturally relevant, at least to the community in which the theater resides. These productions may even feature local celebrities or have other local cultural cache.

I am a firm advocate that social engagement is but one leg of the three-legged online marketing stool. A regular email newsletter, a regularly updated website, and good, engaging, timely social content should all be feeding each other in a beautiful circle, driving audiences to engage with every platform. Besides, with the increasing confusion of how many people will see each post on Facebook or Instagram, and the real-time nature of Twitter, posting more is always preferable to posting less. Very few people are going to complain that you've posted too much, and even if they do, so what? Invite them to help with the next show: they need something else to do with all the time they've been spending on social media.

I can hear my theater friends going, "But, Devra, I'm only one person of a two-person team and we're already producing/directing/acting in/buying props/covering stage management/etc etc etc. How am I going to add a full-blown social media plan to this show?" Have you gotten your 501c3 status? Call your local high school and see if someone needs community service hours who also loves social media. Call a social media influencer and see if they want to participate in the show in this volunteer capacity. Tap your board (because you do have a decent sized board for your nonprofit organization, right? [suspicious look]) and see if they know anyone who could help. I'll do it, for a generous consultant fee.

So, How can small independent theaters/shows use social media like their award show cousins? Here are a few ideas:


Yes, the networks and talent who participate in awards shows have cumulatively hundreds of people who can post social content. But that doesn't mean the small theater shop gets a pass on engaging with their audience in this way just because they don't have as many people. Because this is the crux: the small independent theater must engage with their audiences in every way possible in order to deepen relationships and increase their audience overall.
Posted by Devra Thomas at 1:42 PM